WINNS Services were delighted to be invited to the pre Christmas Lunch at their home ground in Smallford. This was followed by a great game against the Wasps, which St Albans won 22 - 3 in a hard fought contest.

WINNS were represented by Alan Davies and Vicki Goldring, who were treated in  a cordial and friendly way. Alan Davies was impressed with the hospitality he received.  He was greeted by the secretary, Dave English, and Dave Martin, the chairman, was an excellent host and made them feel very comfortable all day. Alan noted, "We are proud to be associated with a well run club, which is the hub of the local community and offers and encourages the youth to aspire within their environment."

It is especially gratifying that our Business Development Manager, George Elliott, plays for St Albans too, so there is a good connection between the club and the business. George was a former Saracens youth team player and St Albans is a club that has firm family roots, with George's brother playing and his father, a former player, now a spectator and club member.

St Albans are now second in the league and have high hopes of gaining promotion this year, so this was a welcome win against Wasps who are also challenging for promotion.

As you can see from the picture below, Alan Davies presented a bottle of champagne to the Man of the Match, Will Latham, in the clubhouse after the game. 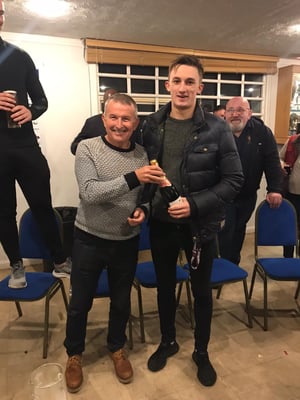 Previous Post Do You Need CCTV Installations And Servicing In Essex?
Next Post How Far Can A WINNS Umbrella Travel?